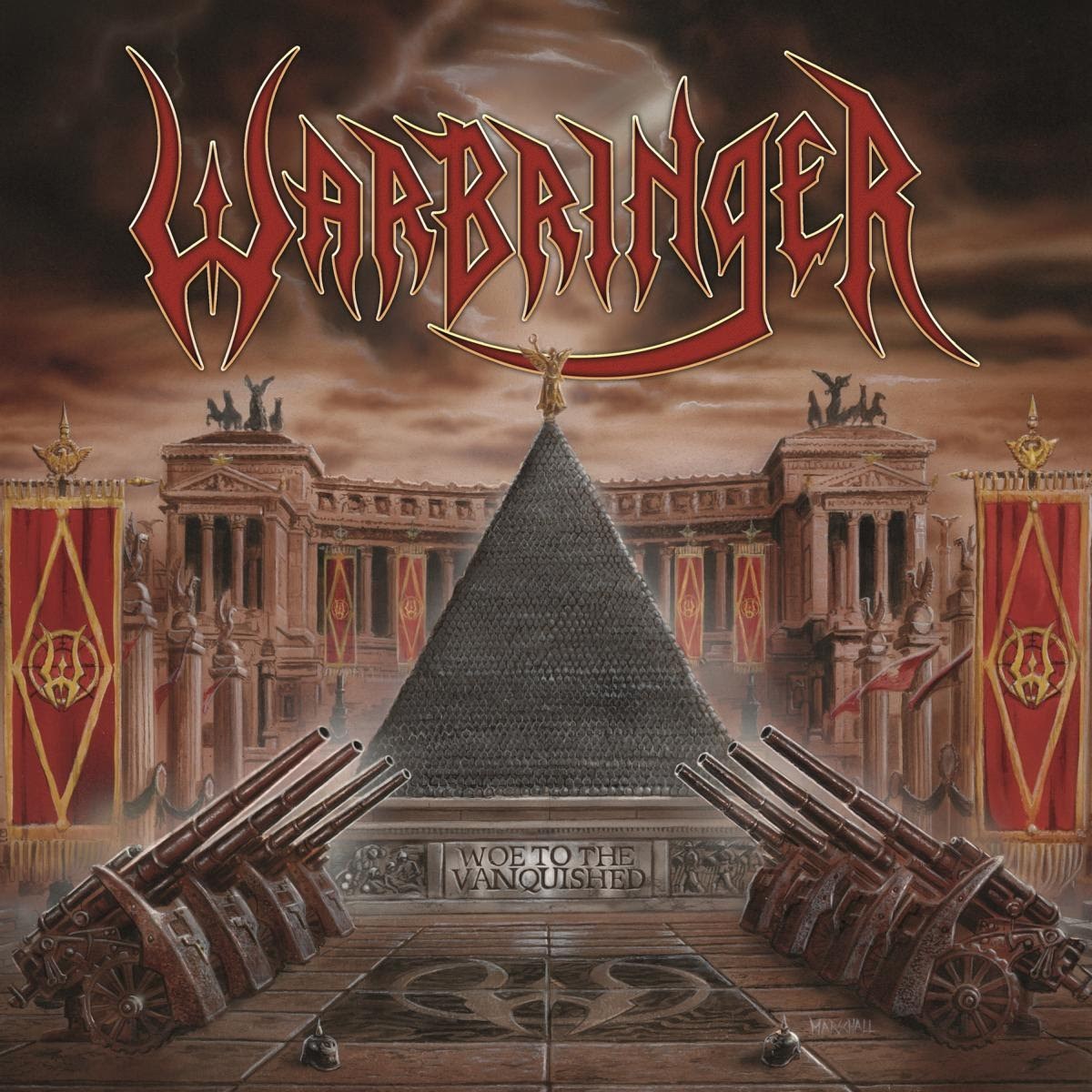 The thrash movement of the 1980’s was without a doubt one of the most glorious and significant periods in heavy metal history. The aggression, the speed, the politically, violent and gory themes, the anger and the power, changed the metal music world forever. Warbringer, the quintet from the LA area, bring all this back, they are a central part of the ‘thrash revival movement’, and they keep the thrash metal torch blazing bright. With five studios albums and endless touring, they have established themselves despite the numerous line-up changes. Their latest studio album “Woe to the Vanquished” (Napalm Records, 2017) is a head-bashing, powerful, raw, all-around ass-kicking pure thrash metal record. We spoke to frontman John Kevill about his ambitions, the new album, the band’s future and much more!

HMA: You were one of the bands responsible for bringing back thrash metal, was that your aim and which are your most significant thrash metal influences?

John Kevill: The band began merely because of enjoyment of aggressive thrash metal music; there was no intent at a revival or anything beyond playing music we enjoyed. We are influenced by something from all styles of metal and much beyond, but for Thrash, we lean towards the extreme, like, Slayer, Kreator, Demolition Hammer, Exodus, Sacrifice and many others. Much speed metal, as well as a lot of bands from early black and death metal, are also influences.

HMA: Tell me about your new record “Woe to Vanquished”, the theme, message and the response.

JK: ‘Woe to the Vanquished’ represents the highest form of Warbringer to date, and is a savage piece of extreme thrash. The record progresses from sheer explosive aggression in the opening section to something more melodic and progressive, but equally dark in nature. We are very proud of this record. The response has been great; we have been playing this record in its entirety to audiences in the USA and Europe with excellent responses throughout.

HMA: You had many line-up changes; do you feel like this time the line-up is solid? Did you find it difficult at the time to maintain your sound despite the changes?

JK: Line up has been a huge difficulty in our history; the relentless touring has always brought high casualties. I feel that with the great response to “Woe to the Vanquished” and the success of 2017’s tours, that we can complete the next record with the same line-up. The sound, however, has been rigorously enforced throughout the existence of the band. It is allowed to grow and change as time changes us, and as our focus changes us for better as musicians, but the core essence and mission of the band is sacred and must always remain as it was upon conception. I have always seen to this.

HMA: What inspires your lyrics and do you believe that it is essential to get a message across through lyrics? Do you feel like the current insane political climate has affected your writing?

JK: At first I wrote about warfare, violence, and death without as much thought to their meaning, and simply based on the sonic properties of the music and how it fits. As our music and my writing evolved (this band is my first and only venture into music, so all I know I have learned from this), it became important to me to add the highest degree of artistry to my lyrics. Many of the lyrics in Warbringer now are about the nature of humankind and the destiny of civilisation. Some songs are directly about visual, in-your-face warfare as people would have experienced it in time, others are more conceptual and about people and civilisation as a whole. I feel that a lot of metal does elaborate posturing about being evil, with the goat skulls and the pentagrams, but if you look at it, the real evil is created by humans and it is by far more frightening than fiction.

HMA: I have read that you are studying history to become a history teacher eventually. Is that something that you always wanted to do, or it became a passion later on in life and how did it start?

JK: I always had an interest in this from a very young age. It started with just liking model aeroplanes and tanks, as well as knights and samurai, Spartans and legionary cohorts. This led to a curiosity about the events surrounding all of this, and as I get older, I accumulate more and more interest. I still have a ways to go to become a professor, maybe 3-4 years. But the main themes I am finding of the nature of time from my various learnings are as follows- that all events in time, both great and small, are interconnected and related, and secondly, that human nature is simultaneously both good and evil on both a great and a small level. I try to add some of these themes into Warbringer’s music, especially on the most recent album.

HMA: You toured and played with many legendary bands, are there still some bands that you would love to play with?

JK: Of course. Slayer, Metallica, Judas Priest are some great and legendary bands we have never been on a bill with and would naturally love to. I’m glad to say my teenage wish to open for Iron Maiden has completed years ago, at ‘The Battle of San Bernardino’ in 2013.

HMA: Your artwork also takes you back to the pure thrash metal days, how involved are you in the artwork?

JK: I am involved to different degrees on each record. Having a tank on the first record was, of course, my doing, and the “Woe to the Vanquished” cover was of my conception. I do always insist on having an actual, physical painting… CGI covers are not my thing and feel like a cop-out for something as personal and as intricately crafted as a record. I am very proud of the “Woe to the Vanquished” album cover, and I think Andreas Marschall did a fantastic job. I think in metal, an album cover used to be something extraordinary, and we want to maintain that element. The record should let you know it is going to be one hell of a metal record before you even hear it.

JK: I have been somewhat out of the loop for a lot of music in recent years, as since the writing of “Vanquished” I have been so intensely focused on our work, as well as a vast amount of study to jam into my head. That being said, there are a lot of exciting bands I know of from seeing them rock on the same stages as us, and I must commend them here. This year we toured extensively with Exmortus, who is one of the most shredding metal bands in the world today, and are greatly underrated. Secondly, Havok gave an excellent show 30 days in a row when we toured with them this spring, great live band, very, very tight. I liked the new Wintersun record as well, very epic and excellently composed multi-section compositions. There’s plenty of good new metal; there is also a lot of stuff coming out that sounds very faceless to me as well. I am pretty choosy with my metal. For me what makes good thrash metal is a sense of adrenaline surge, speed, energy, with songwriting that balances advanced riffology and composition with enough catchy moments to make it all “stick.” I think thrash can be very extreme regarding speed and viciousness but still retains certain rock elements which later forms of metal mostly do away with.

HMA: How did you get into metal? And what made you decide you wanted to be a musician?

JK: No one in my family has much background in this stuff; I found it myself as I got into rock music in general, which eventually led me to metal. I went through a phase where I went and listened to new records every day and learned much of what there is to know about the lore of metal. During this time I went to my first shows (Iron Maiden and Metal Church) and would imagine myself on a stage. I have no prior musical background, and Warbringer is my first band.

HMA: What do you consider to have been an iconic and important moment in your career?

JK: My proudest moment is returning from a crisis in the band stronger than ever with the release of “Woe to the Vanquished.” I think this is our strongest record to date and is in a sense the record I had always dreamed of making.

HMA: Which are your favourite and less favourite aspects of touring? Which has one of the craziest things ever happened to you on tour?

JK: The favourite aspect is playing live, I genuinely love performing for the audience. My least favourite aspect is most of the rest of it. Travelling and then doing the kind of intense live show night after night, to a schedule, is very physically draining and kind of feels like the whip of some invisible taskmaster is upon you. Illness is the worst because I don’t enjoy the shows when I’m sick since I cannot feel good about my vocal performance, and I rarely get time off to recover because the schedule of a tour is not made for that. I love playing live, but I am very happy to have some time off.

HMA: What is next for Warbringer live and in the studio?

JK: Live we have the awesome Thrash Domination festival in Japan, and next we do a string of west coast shows playing “Waking into Nightmares” in its entirety. We also expect to write new material in 2018.