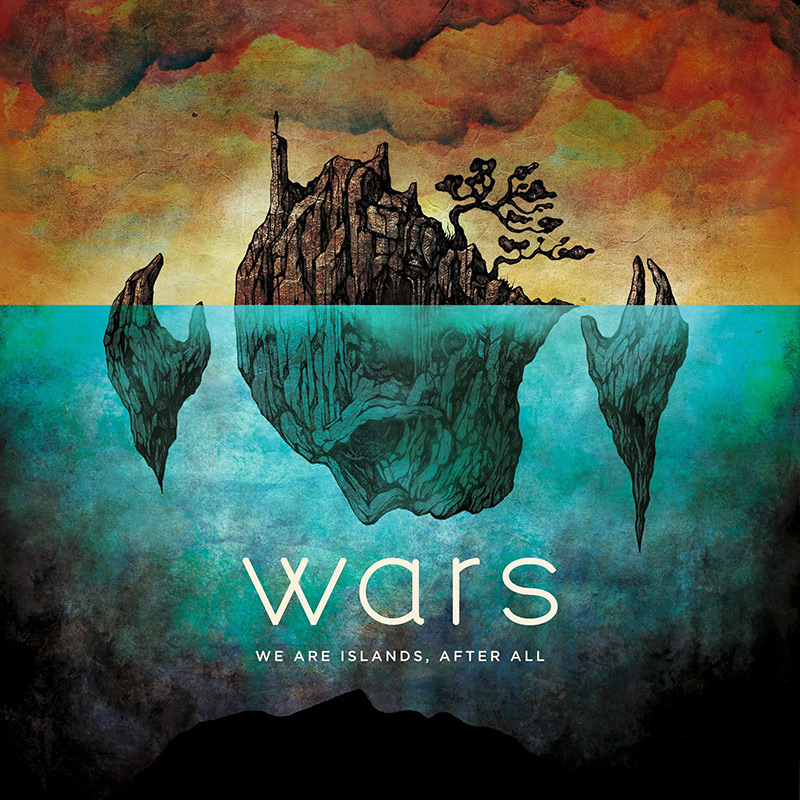 The distance between us

Wars are a post-hardcore band from Rugby UK, formed in 2015 with the purpose of playing music that encompasses the chaos of the war between the head and the heart. A tumultuous, raging catharsis that soars through sentiment and scrapes savagely through the spirit; a passionate, melodic and noise-fuelled affair that, in all settings, combines outright energy, ferocity and finesse. February 2015 saw the band born into existence, with their debut EP ‘And So The Sea Will Claim Us All’ released shortly after. The 5-track which was met with critical acclaim made it into Metal Hammer’s Top 5 EPs of 2015 and Rock Sound’s ‘Top 50’ releases of the year. In early 2016, the band secretly put ink to paper with Universal Music Group’s rock imprint Spinefarm Records (Atreyu, Bullet For My Valentine, Rammstein) and set about carefully crafting their first full-length. Recorded with Matt O’Grady (Architects, Deaf Havana, You Me At Six) and mastered in the US by Alan Douche (Every Time I Die, Cancer Bats, Converge), the ten-track debut ‘We Are Islands, After All’ is pencilled in for release in the first quarter of 2017. Expanding on the personal and philosophical themes of the prologue that was the EP, and with an evolving musical direction, together with the band’s commitment to packing out the tour schedule and hitting festivals, WAIAA is set to make 2017 a very busy year for wars.

HMA: Why are ‘We are islands, after all’?

Rob Vicars: Our music is really the sound of our ideas; ‘wars’ is a reference not to the military or political fighting, but to the conflicts we all face in our own minds. The chaos of the conflict that rages between the head and the heart. We’d like to think it’s a climactic embodiment of these sentiments; aggressive, heavy, and cathartic, soaring, epic, and intricate. It’s a follow on to our EP ‘And So The Sea Will Claim Us All’, expanding on those same themes and ideas, and tying together a lot of the stuff we’ve been wanting to talk about since day one. It’s a cathartic affair, utilizing English poet John Donne’s internal-conflict-strewn life as a vehicle to sort of narrate this existential philosophy that keeps me up at night. I think we knew we wanted to do this album right from the beginning, so writing it felt very natural – these songs were sort of there waiting to come out of us. We’re insanely proud of what we’ve made here, it’s a really personal record, and we hope people connect with it.

HMA: So what makes a great record, what are the key ingredients?

RV: It’s difficult to boil it down to key ingredients. Music has to come from a place within you and trying to engineer that is a bit of a non-starter. But if you’ve got the songs, there are of course other elements that make the world of difference. We’ve always placed a lot of emphasis on surrounding ourselves with the best people, who really believe in what we’re doing. Our producer Matt O’Grady is not only one of the most damned talented people I’ve ever met, but he’s also a real part of the team – he helps make us who we are. A record is always more than the musicians who play on it and it’s important to remember that I think.

HMA: What can you tell about ‘We are islands, after all, lyrical content?

RV: As I mentioned previously, the wars that take place in our own heads, battling with our minds to find sense and reason and purpose, are the things that drive our music. Whether that’s tackling the pit of yourself, living inside a tumultuous headspace every day, or simply examining the world from an introspective point of view – the trials and tribulations of these very real issues are the things that pull the music and the words and the art out of us. I love creating themes and references, and on the album, there are two main conceptual veins running through it. We see the world around us through a lens, a lens made up of everything we see and hear and feel, our learned behaviours and our environments – all these experiences come together to form our perception. This lens is totally unique to each of us, and while this gives us a platform for unlimited creative freedom and individualism, it also renders us all inherently alone, unable to share our full perspective with one another – islands cut off by the shores of ourselves. Along with this, there are references to John Donne’s conflicted life, the tumult of his paradoxes and his struggle to find a platform worthy of edifying his passions, to bring everything together. Those two elements are also intertwined in Donne’s famous poem No Man Is An Island.

HMA: What do you think of the current music/art style?

RV: There’s a lot of amazing stuff going on out there at the moment, some incredible art and aesthetic nuances that bands sort of run with. It’s also something that I fear lots of bands and musicians might not that think about in a big way, which is sort of agonizing to think about – a missed opportunity. With vinyl coming back into the limelight, that makes for an even more lucrative art-based platform so hopefully, we’ll see even better things from the industry in the coming years.

HMA: Why is the artwork important?

RV: A record cover is a piece of art. It’s defining in so many ways, and it’s such an opportunity to express your music in a totally different way. I think a great cover needs to capture your sentiments and take advantage of the fact that it is an alternative art form – the chance to say the same thing differently. Or something else entirely. It should enrapture, inspire and beg of the viewer a question or two.

With the ‘We Are Islands’, After All sleeve, we had this clear idea of how we wanted it to be, took it to a handful of artists and let them give us their own versions of the concept. We tried a few different artists with tweaks to the brief each time, but nothing came back that really struck us. Eventually, when we went to Costin, we changed our plan and said, this is what the album is about, here are the ideas and concepts, do with it what you will. The initial sketches he came back with blew us away, and the final piece was perfect;  exactly what we’d been aiming for. We’re super pleased with the artwork, it’s one aspect of the album that we were really excited to finally reveal and show off as we did back in October.