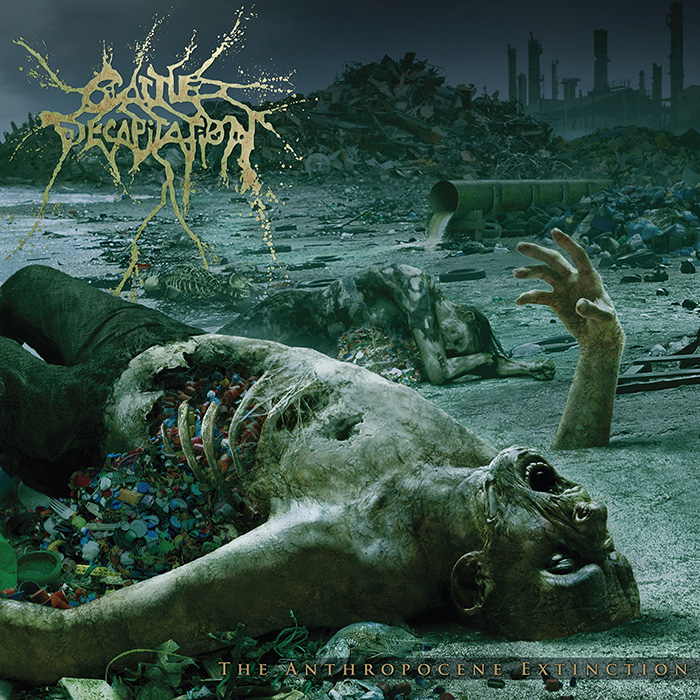 Californian extreme metallers, Cattle Decapitation, and irreverent American illustrator, Wes Benscoter have an uncompromising attitude towards art. That’s probably why their longtime collaboration have proven to be so successful. The first time the band used one of the artist’s twisted visions was for their 2002 opus “To Serve Man.” That was followed by the iconic, over-the-top “Humanure,” and the list goes on.

Fast forward to 2015, Benscoter just spawned a new Cattle Decapitation album cover (his sixth for the band), this time for the critically-acclaimed “The Anthropocene Extinction.” The disturbing image continues with the alarming socio-political discourse explored on some of their previous collaborations. It also dares to propose a bleak vision of the future. Given human race’s self-destructive behavior, such scenario could definitely happen. Below, Cattle’s maniacal frontman, Travis Ryan, takes us through the process of making this artwork and reveals why the work with Wes Benscoter continues to be so exciting after all these years.

HMA: Is there a specific lyrical concept that somehow binds all the songs of the album together while reflecting what we see on the cover?

Travis Ryan: Yes, actually there’s a loose theme that swims throughout the record that has to do with the album title – that we’re ravaging the earth, that we will most likely be our own undoing and that the industries that are hand in hand with our technological advances and the level at which it takes to sustain the populated areas of the world are what will bring about the extinction of our own species.

HMA: One more time, you are collaborating with your longtime graphic artist, the one and only Wes Benscoter. At this point this has become one of the most enduring collaborations in the world of extreme music.

Travis Ryan: That’s exactly how I always wanted it to be. I liked the idea of giving our stuff a specific look so you could always tell it was a Cattle Decapitation album. Wes is by no means exclusive to us like say, Vincent Locke and Cannibal Corpse, but we’ve maintained a great relationship. He likes my ideas and I love his art and know he’s the man for the job. Sometimes I miss the mark and he lets me know. And he’s always fucking right. Then we collaborate until we reach an agreement and that usually only takes one simple conversation and done.

HMA: Tell us about the cover concept for “The Anthropocene Extinction.” Who came up with that idea and what exactly inspired it?

Travis Ryan: I came up with the idea a year or so ago. The problem was, what to call it? That took a little longer, but I knew what I wanted. I had been paying a lot of attention to the great Pacific Garbage patch in the North Pacific Gyre, reading up on what’s going on and of course the devastating trailer for the yet-to-be-released documentary “Midway Film” which hit me very hard. I’ve always done my best to stay away from single use items as much as possible but the real cause of the problem is overpopulation and the populous’ desire for convenience. These are just topics I wanted to cover on this album.

HMA: Were there any other concepts/ideas that were considered for the cover that were eventually discarded?

Travis Ryan: No, actually. I haven’t had that problem since [the album] “Karma.Bloody.Karma!” Haha… Wes and I have really just honed our chops of working together and its like he crawls inside my head and knows exactly what to do. I did have many titles though, which found their way onto the album in the form of song titles but I’ll keep those to myself.

HMA: One of the nicest-yet-more ominous details in the complete panoramic artwork is the presence of the monolith already featured on the cover of your previous album “Monolith…” Is this new vision somehow a visual/conceptual continuation of that previous cover?

Travis Ryan: Yes, when going over the idea, it dawned on me that it would be nice to show the viewpoint of looking down the beach and if that’s the case, then lets make it cover two panels instead of the usual one to give it that epic feel and then right away the idea of having a peninsula of trash with the monolith from the last album cover on it. Oh, and while we’re at it, might as well throw in the building from “The Harvest Floor,” the album before it, in there too! Kind of just like an avalanche of ideas, really.

These three records I feel tie together nicely as they deal more with the environment, something that my father always taught me to respect. Just kinda wanted to throw an Easter egg in there for the fans and it worked well conceptually. I always like that about Derek Riggs’ work with Iron Maiden. That shit was always the coolest so I wanted to impart that to the fans as album art still is an important role in our stuff, even if the industry is starting to move towards a cleaner, more frequent output that may not call for art in the future.

HMA: As usually happens with your album covers this one contains a strong socio-political commentary about where we are heading as a society hyper-focused in consumerism. Visually and thematically, it’s your bleakest cover art, and definitely  reflects an utterly hopeless vision of the future.

Travis Ryan: Yep, that’s basically what’s going on here. We wanted something dark, but still modern and rather relevant. Living next to the Pacific Ocean like I do, you don’t get much more relevant than that, and the fact that overpopulation, sustainability and waste is very much an issue.

HMA: Some of the details that really make emphasis in the physical/social degeneration of our society are the pollution, the presence of what it seems to be large amounts of pills, plastic and ultimately the decay of human and animal life. Was there any specific criteria that you followed in order chose these elements as part of the concept or were just elements that came out during the creative process?

Travis Ryan: I just wanted to focus on the fact that what you do matters. Collectively and independently. Each of our actions, as small and insignificant as they seem, do add to the greater whole and it appears that our existence has only led to the breakdown of ecosystems – and here, the ocean is the target – the vast ocean, the most unknown parts of planet earth. Just one big toilet for us to piss away, which is how it seems its treated, along with all other life on earth. The human as the cancer.

HMA: Of course, the artwork is also a throwback to classic apocalyptic imagery. Was there any specific movies, comics, etc. that influenced the look and atmosphere of this artwork?

Travis Ryan: Not really. I told the band the concept, they dug it and all collectively agreed that we should go with blues and greys and make it as DARK and foreboding as possible. I was down, just as long as we could distance it enough from “The Harvest Floor” because it sounded like they were sharing the same color palette. That’s always something that Wes and I take into consideration. I mentioned “coke bottle green” as a color I’d like to see in there. Just reminded me of “sea glass”… tarnished, weathered, beaten by nature. That’s what you see here, but its our own nature that eventually did us in.

HMA: Did the art suffer too many changes from beginning to end? How did you/the band reacted to the finished art?

Travis Ryan: Not at all. EVERYONE knew what I was looking for and when we got it, I remember Josh looked at me and said “Well… YEAH. That’s it alright!” It was obvious that this was the one and I knew it would be, I mean come on, its Wes we’re talking about here, haha.

I was stoked when I first saw it but I knew what to expect more than anyone and there were a few tweaks that needed to be made composition wise and a few other things we had him change but there wasn’t much this time. This probably had the least back and forth between us.

HMA: On this artwork you keep exploring other themes that apparently seem to be unrelated to the animal-based scenarios of your previous artworks. Is this a conscious approach or is it something just happening as part of your natural development as a band?

Travis Ryan: Things happen for a reason and I think there’s just more stuff to talk about. I do circle back though on every album with songs in there addressing more animal-focused themes. For example, Clandestine Ways (Krokodil Rot) is about busting into a cosmetics testing facility and taking control, injecting the scientists with Krokodil just to be dicks. To show them how ridiculous it is to make animals suffer for other’s vanity. Turning the tables, its what we’re known for, lyrically. BUT, I do have an album cover in mind that I’ll use one day, and I believe I even have the title for it, that will come full circle, but again, I’ll just have to keep that to myself.

HMA: What makes to always come back to Wes every time you need a new cover art?

Travis Ryan: Besides the stuff I already listed, he’s just THE MAN when it comes to making ideas into reality. And I’m always taken aback by them. Sometimes, it doesn’t even register that this is a piece of gold he’s given me because it will be so different from what I had in my mind – BUT… it will always be better.

“The Anthropocene Extinction” can be ordered here.

The book “And Justice For Art” includes the whole story about Cattle Decapitation/Wes Benscoter collaborations and can be ordered here.