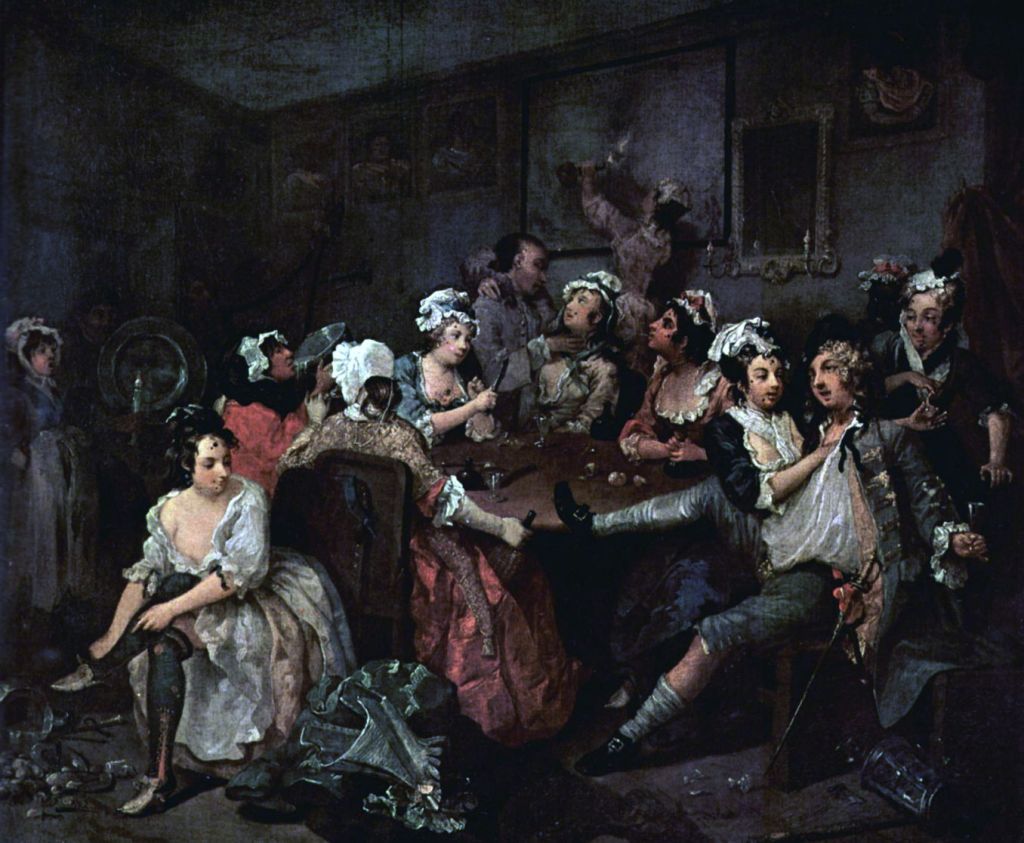 William Hogarth was born in St. Bartholomew’s Close, London, on Nov. 10, 1697, the son of a classical scholar who conducted a private school. In his draft for an autobiography Hogarth wrote that he was exceptionally fond of shows and spectacles as a child and that he excelled in mimicry. He left school at his own request in 1713 and was apprenticed to the silver-plate engraver and dealer in plate Ellis Gamble. Hogarth disliked the drudgery of his apprenticeship and especially copying the designs of others. His ambition to become a history painter was fired by seeing the late baroque paintings in process of execution by Sir James Thornhill at St. Paul’s Cathedral and Greenwich Hospital. During his apprenticeship Hogarth invented a system of visual mnemonics, a linear shorthand that enabled him to reconstruct figures and scenes which had arrested his attention.

When his father died in 1718, “disappointed by great men’s promises” to subscribe to a projected Latin dictionary, Hogarth’s family supported itself by going into trade, his younger sisters setting up a dress shop and he himself going into business as a tradesman-engraver in 1720, the year his apprenticeship expired. His early commissioned work consisted largely of shop cards, ornamental and heraldic designs for silver plate, and illustrations for books. In 1720 Hogarth joined the St. Martin’s Lane Academy, the decisive step in his training as a painter. In 1724 he published his first independent print, Masquerades and Operas, Burlington Gate, an attack on English subservience to foreign art. During this period of intense activity as an engraver, he laid the foundation for his remarkable knowledge of prints, including reproductions of the Old Masters.

By 1728 Hogarth was ready to make his debut as a painter, and he quickly established a reputation as a master of the conversation piece. The following year he eloped with Jane Thornhill, the daughter of his boyhood hero Sir James Thornhill. The turning point in Hogarth’s career (it is said to have effected the reconciliation with his irate father-in-law) was the success of the Harlot’s Progress prints in 1732. The idea originated in a single picture, to which he was urged to add a companion, a typical rococo conceit, but other ideas multiplied until he had told the story of a prostitute’s downfall in six stages. The original paintings were destroyed by fire in 1755. There were precedents for narrative series on similar themes in Italy and the Netherlands, but Hogarth’s invention is distinguished by its strict attention to the model of the English tragicomedy of manners. Publication of his second series in dramatic form, the Rake’s Progress, was delayed until 1735 so that his rights could be protected by the Copyright Act of the same year, commonly known as Hogarth’s Act. His dramatic trilogy concluded with Marriage àla Mode, published in 1745.

Encouraged by his friend Henry Fielding, Hogarth next turned to moral satires that burlesqued baroque grand-manner painting; that is, he chose epic models rather than dramatic ones. The masterpiece of this group is the four prints of An Election Entertainment (1755-1758). He was now an acknowledged leader of his profession, and he led the agitation against proposals to found a royal academy on the French model. Hogarth’s opposition to an academy is intelligible in the light of his earlier efforts to raise the status of British art and free its practitioners from dependence on aristocratic patronage. In the 1730s he had been active in a scheme for decorating the pleasure resort of Vauxhall Gardens with contemporary paintings and sculpture, and in 1745 he followed this up with an even more ambitious project for the presentation of works by living artists to the Foundling Hospital, the first donors being largely recruited from the St. Martin’s Lane Academy, which he had revived in 1735. Hogarth believed that if artists united to exhibit their works and especially to sell prints made from their paintings they would be able to resist the influence of the connoisseurs, against whom he waged a lifelong war.

Hogarth threw himself with equal energy into moral and humanitarian causes as a governor of St. Bartholomew’s Hospital and a foundation governor of the Foundling Hospital, frequently joining forces with Fielding, for example, in an anti-gin campaign. Hogarth was particularly concerned with the welfare of the young of the laboring and artisan classes, for whom he designed the series Industry and Idleness (1747), and with the prevention of cruelty, the theme of the Four Stages of Cruelty (1751). At the same time he never relinquished his ambitions to become a religious painter in the grand manner, executing more monumental pictures for churches and public institutions than any other English artist between Thornhill and Benjamin West. His narrative satires gained Hogarth a Continental reputation. His income was adequate to support a town house, a country home at Chiswick, and six servants. In 1757 he obtained the highest honor open to his profession: the appointment as sergeant painter to the king. He was at work on his last print, the Bathos, a mock-rococo counterpart to Albrecht Dürer’s Melancolia, when he was taken ill and died at Leicester Fields on Oct. 25, 1764.