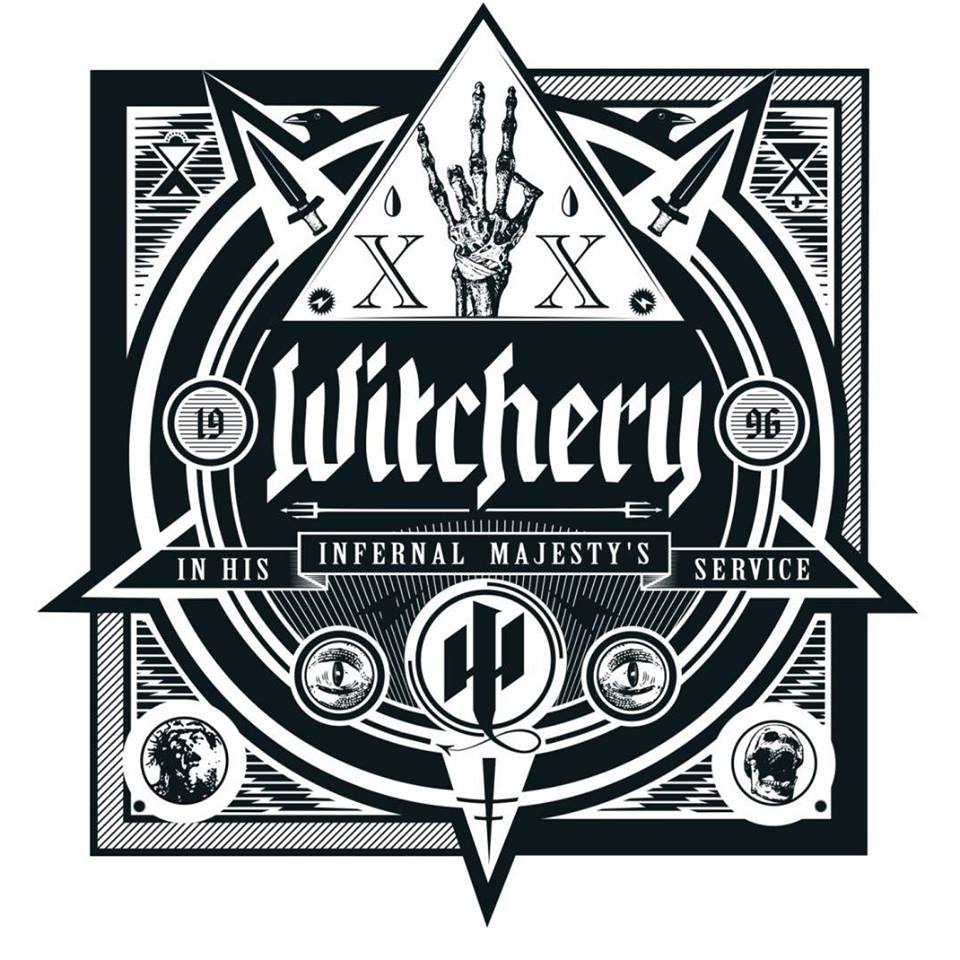 WITCHERY played a score of festivals in support of their latest release “Witchkrieg” (2010), did a tour of Japan together with Vader and Watain, but unfortunately the band’s line-up rotation continued. While former Dark Funeral vocalist Emperor Magus Caligula assumed live-session duties for a while (replacing ex-Marduk/ Devian frontman Legion), it was only recently that guitarist and band-leader Jensen managed to gather the right new members for the recordings of “In His Infernal Majesty’s Service”, as he explains:

“We’ve sadly had to part ways with two members prior to this album; long time band member Martin Axenrot and live member (and recording member-to-be) Emperor Magus Caligula. Martin’s departure is purely down to him being too busy with his other musical endeavors and Caligula had to leave the band over an unfortunate medical condition involving his hearing. These are both serious losses for the band and we wish them all the best in the future. We have however been able to find more than able replacements for our two lost brethren: Chris Barkensjö on the drums and Angus Norder on vocals. They both bring fresh blood and fresh ideas to the band and you can clearly hear that they both have made it necessary for us “old members” to step up our game a notch or two!”

Celebrating the 20th year of the group’s existence, ‘In His Infernal Majesty’s Service’ showcases an illustrious and  revamped line-up consisting of original members Jensen (Guit., The Haunted), Rikard Rimfält (Guit., Seance) and Sharlee D’Angelo (Bass, Arch Enemy), alongside new additions to this nocturnal guild Angus Norder (Vox, Nekrokraft) and Chris Barkensjö (Drums, LIK). Self-evidently, WITCHERY stays the stylistic course and continues their infamous tradition of combining the best elements of old school Thrash, Speed, Death, Black and ultimately pure Heavy Metal with dead-on songwriting precision for maximum listening pleasure. In regards to the musical approach and the recording procedure goals with the new album, which was produced and mixed by Daniel Bergstrand at Dug Out Studio (Behemoth, In Flames, Meshuggah), Jensen adds the following:

“Musically, I wanted to make this album more raw than the previous ones. Perhaps as raw as the first album even. I really didn’t want to over-work things, as I myself enjoy music that comes more from feeling and enthusiasm than music that has been contemplated and construed. This album is recorded by Daniel Bergstrand at his Dug Out Studio in Uppsala, Sweden. Even though Daniel has been a high profile name for ages within the Metal community, I’ve never had the opportunity to work with him before. I have to say that Daniel is really easy to work with. All around a great guy and he immediately understood what I was looking for production-wise when I spoke to him about the album. My main request was that I wanted a raw and unpolished production. I really dislike productions where you can hear that the band has had ages to complete just one song. Where there might be a month’s worth of coffee breaks between the guitar takes etc. I wanted it to sound like a real band that is playing together. My second request was that I wanted the drums to sound like on Van Halen’s “1984” album. I seriously love that aggressive middy drum sound. I think Daniel did an amazing job and I know that he rates this production very highly on his own personal list of albums he’s worked on…”

WITCHERY’s ‘In His Infernal Majesty’s Service’ comes packaged in classy artwork (See above!) by Andreas Diaz Pettersson and Jensen comments on the cover as follows:

“Long-time friend of the band – and designer of many things associated with WITCHERY – Andreas Diaz Pettersson was once again called upon to create the artwork for our new album. He has a great ability to create artwork that really stands out within the scene, without compromising on quality or with the essence of the band. We are very pleased with what he has created for us, and we think the artwork is a great addition to the overall massive quality and appeal we truly believe this album to have. Stoked!”