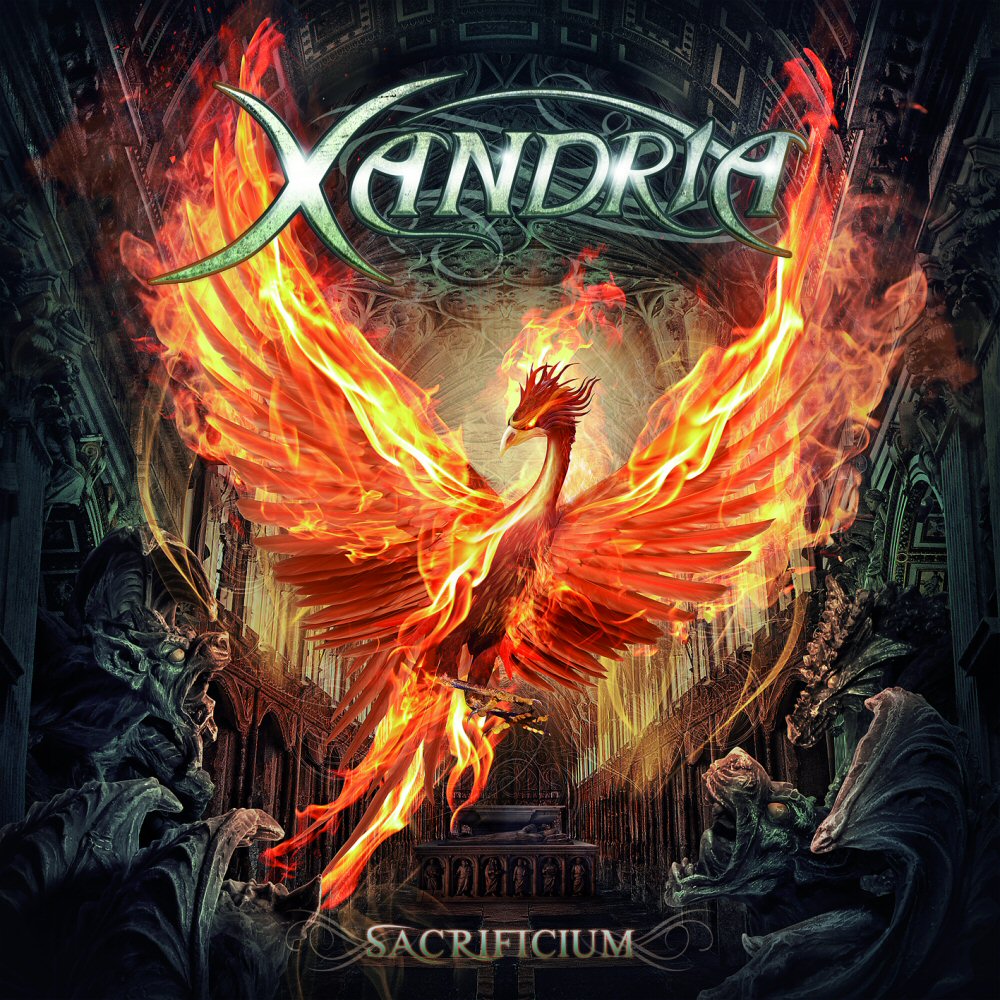 The X Word, a sacrifice interview

After six albums and through many line-ups changes Germany’s proud Xandria is still firing their symphonic metal and hitting road with their brand new album ‘Sacrificium’. Heavymetalartwork.com got the chance to talk with Steven Wussow and Marco Heubam about their past, present and future.

HMA: First of all congrats for your latest amazing album “Sacrificium” and placing it in various charts around Europe. It seems it’s well accepted by fans and gaining new ones also?

Steven: Thank You! Yes, we are still overwhelmed by all the positive feedback we got so far. You know we knew we had produced a killer album, but you`ll never know if your fans will see it the same way. Especially with having Dianne debuting as our new singer. So we are very happy that the fans like the new record as much as we do and it really seems that we gained a lot of new ones too if we look at the attendances of the shows we did in May.

HMA: How’s the new album different than your previous ones, except for the new singer of course?

Marco: And the new bass player, don´t forget this. Though many non-musician listeners may not even figure out where the bass is in a production sound, it is a really important part of it, and it´s important to have a bass player who is able to create good bass lines that support a song the perfect way. I think the combination of individual talents has never been that fantastic as it is now in this band before, and you can really hears that on the new album. In general, to answer your question, we did a real restart of the band with the last album “Neverworld´s End”. It is not the continuation of the albums before, which now belong to an older “era” of the band. And with “Sacrificium” we recorded the second album of the new era.

HMA: Dianne van Giersbergen came in when the album was in its producing phase, was it easy to set her up?

Steven: She really joined the band at the unluckiest moment. The moment she joined we said “Honey, you`ll have to learn those 20 old songs because the next tour will start in a couple of weeks…and by the way, some weeks after that you`ll have to be in the studio to record 13 new songs”. I still don`t know how she managed this shitload of work. But she made it!! I have the deepest respect for her professionalism and work ethic. She really worked like a dog. So to sum it up the first months were really rough for her. We tried to help and support as well as we could, but for the most part, had to be done by her. And once again she did and is still doing an absolutely amazing job.

HMA: What would be the three most important songs from the new album and why?

Marco: I don´t really like the idea to name a number of “most important songs” on this album. Sure, there are some songs that we put more effort into than in others because of their complexity and there are some that contain elements that are new for us, therefore have been more interesting and being focused on in the making, and may also define the way we are going as milestones we did not pass before. But all the songs on the album play a role and are making the album what it is in its entirety. Diversity is something important for us, so it´s hard to point out only a few songs. Also for everyone – in and outside the band – this might be a different choice anyway because priorities are different, and associations differ with the things we connect with the songs or their making.

HMA: What are your personal favourite songs when played live?

Steven: From the older ones definitely “Blood On My Hands”. From Sacrificium… hm, again not easy…  but “Until The End”, the title track “Sacrificium” and “Dreamkeeper” would be a good choice I guess.

Marco: I really like “The Nomad´s Crown” because it is like a little movie and while playing it; it is like exploring the story, going through it like a movie actor. From the new album, the same applies to “The Undiscovered Land”, a slower one, but very atmospheric. I also love “Until The End” because it´s energetic, straightforward power metal, still retaining this storytelling feel.

HMA: When I first spotted you back in 2007 with the amazing “Salome” album you still got the India vibe going. Is that all gone now?

Marco: We never aimed for having an oriental touch as a trademark. And on that album it was just a concept for the artwork, referring to the metaphoric picture used in the lyrics of the title track, same for the “India” album by the way. When we use elements like Celtic, oriental, orchestral colours or the choir, we do it in the way a film score composer does it, namely to enhance a certain atmosphere we want to create, but not to define our style with them or claim to do it in an authentic way like an original folk band can only do. So every now and then we use elements like this, also Indian or Arabic sounding ones, when we felt it would be giving the song the right ambience. You can also hear some of these on the last two albums; just listen to “The Nomad´s Crown” from the last album. More oriental stuff we never did in a song before.

HMA: Your lineup has been changing a lot but it doesn’t seem to distract the quality of your albums. How do you keep your act together?

Marco: On the personal side we of course always tried to look for the best musicians we could get into our band, musicians that are able to carry the vision of Xandria, if not even improve it. On the purely musical side, this is not that much of a problem, because I write most of the music, so the basis for everything is not changing.

HMA: How does it work when Dianne is still in Ex Libris band’s vocalist also?

Steven: Pretty easy. You just have to compare each other’s schedules and there are always free spots to make both bands happy.

Marco: We came up with a rough idea for the cover and gave it to Heile, who is the artwork designer responsible for both “Sacrificium” and also “Neverworld´s End”. We really love the way he was doing it! It also marks the new era for the band; it was only natural that also the style of the artwork was changing. I have to say that I am not happy with the artworks we had in the early days of the band. We really did not know where to go and what we really want, and this resembles very much in the artworks. Now, this is totally different.

HMA: Could you tell us about the video production for “Nightfall” video?

Steven: The actual shooting took place in an old church ruin somewhere in a small city near Leipzig. As no one felt responsible for the building or to give us real permission to shoot there… we just did it. Guerilla video shooting so to say… and a long but funny day. Many shots had to sort out because someone stumbled over stones lying around and the others were laughing their asses off. Or someone started to dance in the background of some solo shot without knowing that he or she is been seen. All in all a great day with a cool video as a result. There is also a nice making of up on YouTube.

HMA: What is the meaning of a good music video for bands in 2014?

Steven: Nowadays a video release is quite similar to a single release 20 years ago, only cheaper and more efficient. So the Videos are the first impressions people get of a new release. And via all those viral marketing and the social media networks it is pretty easy to spread “Nightfall” or our lyric video “Dreamkeeper” all over the planet without investing in large media and promo campaign. Also with the help from friends and fans. At this point… THANK YOU FOR YOUR SUPPORT! We really, really appreciate that!

HMA: What about the meaning of album art in the world of mostly digital music?

Steven: If we are talking only about digital music, it doesn`t have any further meaning I guess. To be honest who is interested in looking at all the details of a cover on a tiny smartphone screen. But if we are talking about the whole package, physical releases, merchandise and also our onstage presentation is it as important as it has ever been. Maybe even a bit more. The people who are still buying physical products are more and more looking for something special. I am also like that! This is also the reason why we invested some time and money in an artwork that looks perfect. The vinyl and the limited mediabook edition are looking so great. I really got goosebumps when I saw them for the first time printed.

HMA: Since you started in the ’90s how much has the music business changed in your opinion?

Marco: We all know about the biggest change, from physical to virtual sound carriers. And I don´t want to deliver the typical lecture about this development again here, because we all know about that. We also all know about the internet revolution that happened in that time period, with all it´s positive and negative effects. So, to answer your question: Really a lot. But in the background, most of the old structures are still there. Bands still have record companies, managers, booking agencies. But the way of promotion has changed, and also bands began to start the own companies, like financiering a record production with a crowdfunding campaign. This makes bands more independent, but the risk is higher.

Steven: Oh, I don`t know. I`m not the “planning” guy. I just can tell you that I hope that it just continues the way it is known. Makin great records and playing shows all over this little blue planet to as many people as possible. I am having the time of my life right now. So it hardly can get any better.

HMA: What do you do when not creating music and not touring? What Xandria does in their free time?

Steven: To be honest… Nothing. Just relaxing and catching a breath for the next round 😉 But I guess you`ll only need free time if you don`t like what you`re doing. And we honestly love and live what we are doing. So then… Rock n’ Roll Forever!

Marco: Actually there is a lot of things going on in a band even when not creating music and touring. When at home, we, of course, try to enjoy some time off, but there is organizational and business stuff to do every day. But if there is free time, I like to enjoy music, movies, video games, books, meetings friends & families, a walk in nature. This is, as Steven said, absolutely necessary for regaining energy and also getting new inspirations for the music because the inspiration for the music is life itself.

HMA: Thank you so much for the interview! Have a great tour in 2014!

Marco: Thank you so much! And thank you and all your readers for your support! We really appreciate it! All the best and peace for you all!