Zev Deans & Ghost: From the pinnacle to the pit (Spinefarm – Universal) 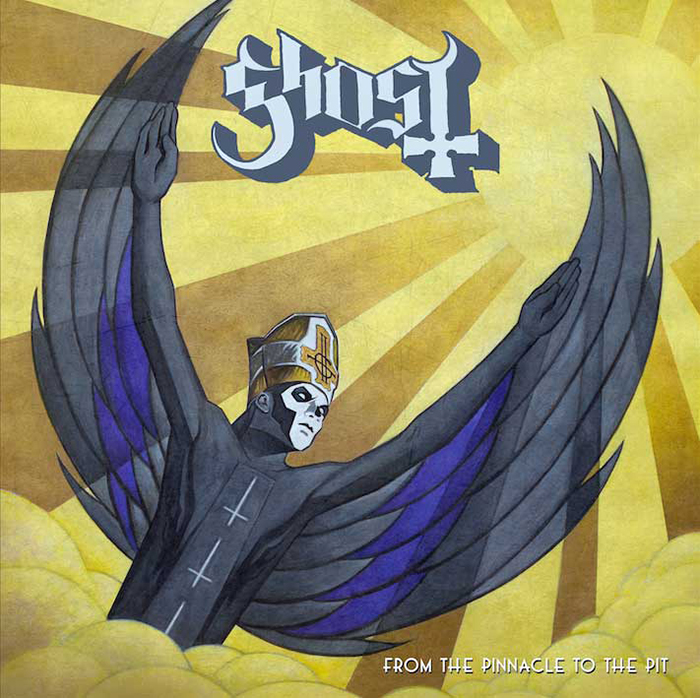 I can’t begin to tell you how much I enjoy watching it over and over again. The creative consistency of both music and visuals are impressively strong. How was the concept approached and at what level was the band involved?

Zev Deans: I was approached by Ghost around late July.  They had a loose idea of what they wanted, that they were looking for a sort of origin story for the new incarnation of their singer.  The brilliant album artwork by Zbigniew Bielak already had established an aesthetic that I was eager to explore. I have been a deep lover of Art Deco and the German Expressionist films of Fritz Lang since I was a teenager. The band and I traded ideas, and then I went forward and wrote a rough narrative that began to reflect the ideologies that were swimming around in the era of Deco, mainly the clash between the proto-neoliberal Ayn Rand and the anti-capitalist sentiments of films like Metropolis. The band approved my narrative and I didn’t need their participation again until the footage of Papa Emeritus III was filmed in Sweden, by Lavette Film.

We see references from a good number of expressionist science fiction films, of course Fritz Lang ‘Metropolis’ has a strong presence throughout the video. What other films have been used either as reference/inspiration or from direct use? Was it easy to have copyright permission?

Zev Deans: I took a lot of inspiration from the architectural drawings of Hugh Ferris, and my VFX teammate, Madeline Quinn, drew a lot of inspiration from the set designs of Ken Strickfaden. Strickfaden was solely responsible for the brilliant laboratory sets and Tesla coil devices that we see in films like Frankenstein and Metropolis. For the actual video, I borrowed and altered scenes from three films: Cecil B Demille’s Madam Satan (1930), Messe Noire (1928), Forces Occultes (1943) & Act Your Age (1949). Based on fair use laws related to satire and art, our bases were totally covered without the need for permission.

The visuals narration seems to me like a collage of scenes, takes, cuts, etc. composed to build on Ghost music and lyrics. How did you manage to use the right ones and how much filming was it required?

Zev Deans: The only actual filming happened in Sweden, to add Papa Emeritus to the story. I sent storyboards to Ghost, and they worked with Lavette Film to execute the shoot. It worked out great, I’m very lucky to have their participation. Everything else you see is essentially dense Photoshop documents created by myself and Madeline. Once a scene is built in Photoshop, we bring it into After Effects and move a 3D camera through it to create the illusion of depth.  We spent a great deal of time sifting through clips, once the narrative was fully fleshed out, and I came up with a lot of ways to metaphorically link the narrative to the lyrics of the song.  It happened quite naturally.

Light and texture is specific to the video, how did you approach it?

Zev Deans: I decided on a specific color palette and filmic treatment early on, and I just applied it to everything we made. Obviously, German Expressionist films and the drawings of Hugh Ferris served as a huge inspiration for the lighting. I absolutely adore the soft textures and hard shadows inherent in the films of that era.

The silent film narration tells the story of the song in a different way, almost like a story within a story. How was this developed?

Zev Deans: A song essentially serves as the outline for your script, so I already knew when the major plot twists needed to happen before I started. The rest wrote itself as I decided on the specifics of the narrative. Every project unfolds organically, if you know how to pay attention to the signs and symbols that are tucked into the research you do. Once I decided on a motif, this sort of occult elite organization using the inventions of Nikola Tesla as a means to control a city, the rest revealed itself rather quickly. I quickly found the symbol of a fist holding a lightning bolt in a google search and adopted it as the symbol for the elite group. It was no surprise to me later that the symbol was in fact the motif for the exterior of the GE building in Manhattan.  This couldn’t have served as a better coincidence, an overgrown corporation suggesting man’s ability to control nature.  It served as the perfect metaphor for the arrogance of power.  When projects lead me to these happy accidents, I know I am on the right track.

Zev Deans: I knew that I wanted to end the video by recreating a drawing crafted by Zbigniew Bielak, used to illustrate the song in the album art. The rest was afforded me by the brilliant people I worked with. Lavette Film capture Papa from the perfect angle, and Madeline constructed the scene beneath him with the sort of patient brilliance that has saved my ass since I met her.