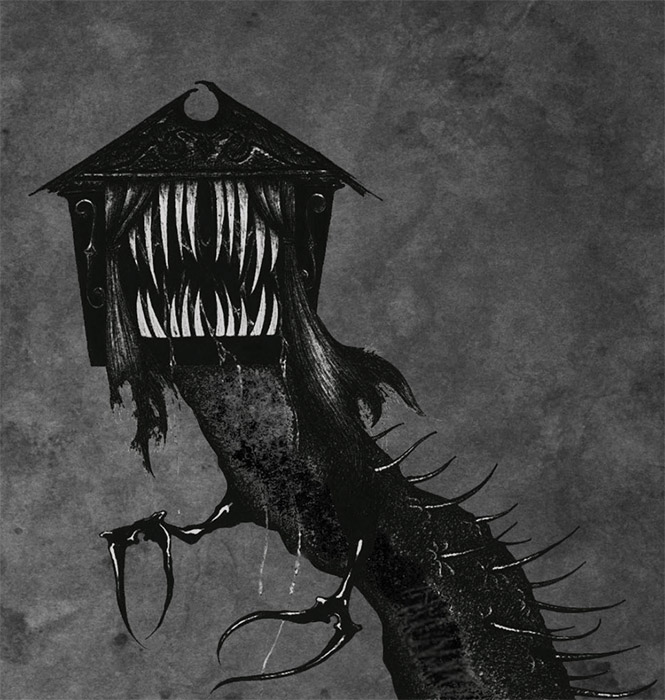 The dawn of Dark Nouveau

HMA: Hello Zev and thanks for this interview. Not judging but looking at your other work the style used for ‘Portal’ and ‘Behemoth’ are considerably different. How did you get involved?

Zev Deans: I contacted Portal. Behemoth contacted me, after seeing the ‘Portal’ video.

I’m not sure if by style, you mean music, but if you mean the style of the videos, I chose an old silent film look for ‘Portal’ because their sound is mired in filth, layers of ancient noise. Made sense to use a lot of layers of actual 16mm film dirt, and bury everything with blackened shadows. Also, they are very inspired by Lon Chaney and horror from the silver screen era in general.

For Behemoth, I wanted something a little more crisp, so you can see the detail of the sets and costumes clearly.  I decided to make it an HR Giger tribute, since I was preparing  a Giger film festival at the time. His work is crisp and clear, and loaded with detail. And Behemoth’s production is very crisp and intense. Made sense.

HMA: Both bands’ music is incredibly intense and both touch deep emotions rooted in religious myths. Are these stories eternal and always present in our imagination, unable and exorcise and ultimately unable to break free?

Zev Deans: ‘Portal’, I’m not sure they have anything to do with religious myths, they are more inspired by Lovecraftian themes, a sort of horrific nihilism. ‘Behemoth’ is certainly the most religiously themed metal band I know of, they are VERY knowledgeable of the bible and know just the right way to turn it on its head.

All of my work seems to gravitate to stories, myths & themes of antiquity or history. I’m a fan of the classics, as well as the myths of ancient civilizations. I’m working on a video right now, dealing with greek myth, and the video after that will center around an alchemical interpretation of Arthurian legend. I guess that’s pretty metal.

HMA: Any of the musician involved with the production of the videos? Also Toxic Vision was involved in producing the costumes for ‘Messe Noire’, what challenges and direction was taken? What elements have you added to the story and composition?

Zev Deans: I always come up with my own concepts, and then present them to bands. Generally, they just go along with what I suggest, and we go back and forth with the details.  I tend to do my research (on the band) pretty heavily when I start a project, so by the time I suggest a concept and submit a treatment, it is already doctored to the style and themes of that band. That’s probably why I’ve never been asked to change an idea. I am always careful to respectfully make sure the band is happy with the way I’m representing them. Often they don’t have any involvement at all, unless I want them to be in the video.

Working with Sharon of Toxic Vision was a wonderful experience. I would send her concepts and drawings, and she would have a finished product almost the next day. She is a shock of brilliance, she is so dedicated and fast and easygoing, and she brings so much creativity and passion to the table. I felt very lucky to collaborate with her. It was the first time I happily handed over control on a large aspect of a project, and I look forward to working with her again!

As far as elements I added to the story and composition of Messe Noire, I guess I just took the story of Lucifer’s fall from heaven to hell, and added my own style to the imagery, as well as a sort of Black Mass element, both to match the song title AND to have an excuse to put Sharon in the video.

HMA: I find influence of early cinematography as well as puppetry, stop motion, etc. How would you describe your style and technique?

Zev Deans: Well, I’m obsessed with all things that are done by hand, I was an artist before I was a filmmaker, and I guess I still consider film as just another way to explore visual art.  There’s something so visceral about a good practical effect. ALIEN still beats the living shit out of any modern scifi OR horror movie.  That’s because it was a rare occasion when an artist was given a Hollywood budget to bring their vision to life. RIP HRG.

My mother raised me on good film and art. So when most kids were watching Saturday morning cartoons, I was watching Fritz Lang and Kubrick (don’t get me wrong, the 80s had some GREAT cartoons). I still get a warm fuzzy feeling when the original Dracula’s title credits start. I loved them so much, I even made my own version, with the Portal intro.

As far as puppetry and stop motion is concerned, I remember when I was 12 years old, the ‘Tool’ videos for ‘Sober and Prison Sex’ came out on MTV. I was glued to the TV screen, and my mom walked in and said “Is that a new Brothers’ Quay film?”. So then I started watching Brothers Quay films, and that shit is the real deal, my friend. Also, I grew up when the Dark Crystal and Labrynth were brand new, so I fully absorbed those films when my brain was still developing. If I have anything to do with it, there will be movies like that again.

HMA: What is your studio like and do you have a team of coworkers that help and provide support for your work?

Zev Deans: I’m usually such a control freak, I do everything myself. Portal was essentially just me, in my studio, building everything from scratch out of garbage and bones, for months.  My studio is in a former catholic church, the oldest in my neighborhood. So there is a priest’s skeleton buried somewhere under the building, I know it. The only person I consistently collaborated with through the years is Jacqueline Castel. Aside from being an extremely talented director, she is also the best cinematographer in New York. I was lucky enough to have her help filming a lot of my videos and teaching me how to do it myself. I was a visual artist, not a photographer, so I had to learn that aspect of the work from scratch in the last four years.

It wasn’t until ‘Behemoth’, that I learned how to collaborate and work with others on sets and costumes. Because of that project, I met a lot of great people who were willing to help me build, and it was also the first time I worked with someone who does motion graphics, instead of teaching myself more programs. I wouldn’t have survived that project if it wasn’t for all the great people who jumped on board. It saves time, and I have fewer suicidal thoughts during the process.

HMA: What was the final feedback from the bands?

Zev Deans: It’s hard to say. They all seem resoundingly pleased, but it’s hard to tell. I put a lot of work into everything, so I guess it would be hard to tell me something sucks after I nearly kill myself making it. I assume they are being honest when they say they like it.

Nergal and the gang from ‘Behemoth’, especially, were the most enthusiastic and supportive.  You’d think people get more hardened and ego-driven as they get more successful, but I’m learning it’s the opposite. Those guys were so happy and giving with praise, it was certainly the most positive feedback I’ve ever gotten. Success can come quickly to those who like to fuck people over, BUT IT ONLY LASTS for those that practice and appreciate hard work, honesty and communication.